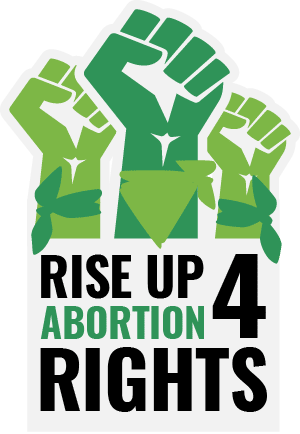 The Illegitimate Overturning of Abortion Rights Must Not Stand!

The Illegitimate Overturning of Abortion Rights Must Not Stand!

The Illegitimate Overturning of Abortion Rights
Must Not Stand!
Forced Motherhood = Female Enslavement
LEGAL ABORTION On Demand &
Without Apology Nationwide!

I want to start by admitting that it takes a lot for me to write this, because this is a heavy subject, and so many of us are demoralized and enraged by the recent overturning of Roe v Wade.

I am disappointed that some folks are basically practicing McCarthyism with the organization that the young lady interviewed by MSNBC regarding her disappointment with the Democrats and I are a part of, Rise Up 4 Abortion Rights.

I am a part of different organizations and movements, but I will focus on Rise Up 4 Abortion Rights in particular.

Rise Up is a coalition of many people with different political views and backgrounds, but are being attacked because one of our initiators is a RevCom ( a Revolutionary Communist). So what?

Rise Up is a recently formed organizing and advocacy group, not a direct services organization. People are making false claims about it being a “cult,” and misusing funds. This is just truly sad and disappointing, to say the least. Rise Up did outreach to numerous reproductive rights organizations and many of those groups were not receptive. I was personally a part of this effort. However, now, instead of asking and meeting with Rise Up about any of their concerns, these organizers proceeded to spread misinformation at a time when fascists are advancing by the second.

Rise Up has been organizing with Black, white, Brown, indigenous people, Asian, undocumented folks, and Latinx people; some of who were actually a part of the original green wave in Argentina and Colombia, and with LGBTQIA/gender non-conforming folks.

And as with any recently formed organizing, there is always learning and growing to do of course.

Rise Up’s embracing of the green bandana is not to appropriate a movement, but rather inspiration and guidance from people who were successful in protecting people’s right to bodily autonomy with massive movements in countries with fewer economic resources than the United States.

Rise Up has been involved in direct actions since February by disrupting, educating, organizing, and protesting weeks in front of SCOTUS and other actions, not just electing and supporting Democrats. Is Rise Up provocative style too much for some people? Perhaps.

Again, as we all know, organizing to disrupt a system will certainly bring discomfort and difference of opinions and approaches.

In my experience, Rise Up has never discouraged anyone from supporting and donating to planned parenthood or other abortion funds. One way to look at it is this:

Supporting direct services: If you want to support direct services for people who need access to safe abortions, you can donate to Planned Parenthood and local abortion clinics.

Supporting mass actions: if you want to support mass organizing and disrupting business as usual in order to now reverse the illegitimate overturning of Roe v Wade, then you can join and support Rise Up and other community organizing groups.

Remember, no right was won by appealing to the good graces of those in power.

Ideally, wouldn’t it be great for the group of people attacking Rise Up to unite in solidarity to have a greater impact in protecting our communities in need?

There are many of us that don’t agree with some of the practices and electoral decisions of organizations we are a part of, yet, and I can only speak for myself and many folks I organize with- we wouldn’t dare to bring this difference of opinions and disagreements to the general public for the enjoyment of the fascist’s forces that thrive in witnessing our leftist and progressive movements divide.

However, these allegations are different from mere political disagreements- these is character assassinating and false accusations that have legal and safety repercussions. Many of us at Rise Up, is being harassed by people on the left and right.

I would like to humbly encourage you to please take a step back and evaluate the potential consequences, and safety risks that such allegations and statements have on real people like us with families. We are simply striving for making whatever difference we could make, in a system that was designed to oppress and dehumanize us.

I would be more than happy to connect with and connect anyone interested in engaging in a resolution dialogue with the leadership of Rise Up.

Especially at this time, we must unite to fight for access to safe and legal abortions, and reproductive rights for current and future generations.